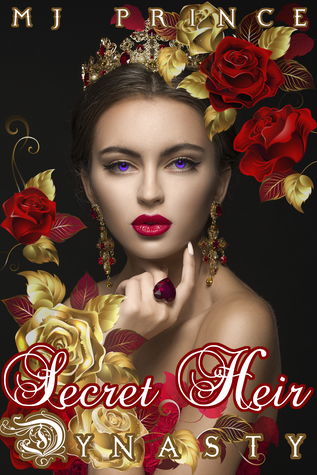 I was kinda of excited to read this because it’s got some of my favorite things in it: elemental magic, boarding schools, enemies to lovers – all good things. Unfortunately, I was mostly just underwhelmed with the story and found it to be pretty forgettable. Secret Heir follows Jazmine Woodson as she’s thrust into a parallel world and she discovers secrets about her herself and her history that changes everything.

Things I Didn’t Like
I wasn’t the biggest fan of the writing. I found it to be incredibly repetitive, especially in the beginning of the story. I also didn’t love Jazmine’s narration in the beginning – it was cheesy and read a little young (especially for a seventeen year old who is basically taking care of themselves).

I found the worldbuilding to be a little lacking We know that Eden is a mirror image of Earth and that there are 7 powerful Dynasties, with 2 alternating ruling families, but we don’t really know much else. I feel like I barely learning about the Dynasty families, and we learning really nothing broadly about Eden – we really only see the boarding school. There were also some mysteries that were ignored, like the mysterious threats against Jaz, that made this book feel more like a part one.

I didn’t feel particularly connected to any of the charactersor the relationships. I mean there were definitely some that I liked more than others, and I think the friendships were done pretty well, but most of the Heirs felt one-dimensions – especially Layla. I didn’t love the romance in the story, I wanted enemies-to-lovers, but it felt more like enemies who decided to start hooking up – the relationship didn’t really feel developed, just progressed. I wish that Jaz and Magnus had more time together, to really develop their relationships, but we didn’t really get enough of them.

I’ve seen this compared to Paper Princess repeatedly, and I can see the comparison, but I enjoyed that book more. Though if you liked one, you’ll probably like the other so it’s worth giving it a shot. It was a really quick read, and really easy to read, but I don’t think I’ll be continuing with the series.

I received a copy of the book from the author in exchange for an honest review.

One thought on “ARC Review | SECRET HEIR by M.J. Prince”