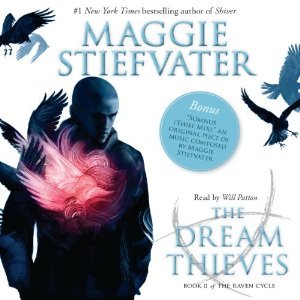 “While I’m gone,” Gansey said, pausing, “dream me the world. Something new for every night.”

I can officially say that I like this series more than I ever have before and all the credit goes to the audiobooks. While I did like this a little less than The Raven Boys, The Dream Thieves is still a stellar addition to this series. This series is no longer so narrowly focused on Glendower and Blue’s soon to be tragic true love’s kiss, we explore so much of the town and really get to know these characters on a personal level.

Things I Liked
We get so many different character dynamics and interactions in this book and it was a joy to behold. Some were unexpected, some were what you expected, but they were all great.

Like Blue, I fell more in love with all of the the Raven Boys in this book. I still don’t know if I can pick a favorite, but I think they just work so perfectly as a unit, even if some of them are at odds.

I had some mixed feelings about the Gray Man, but once I got into the story a bit more, I really liked what he brought to the table and the mystery that surrounded him. He fits well and I’m curious to see what happens next.

There are just so many lovely and amazing quotes in this book that listing all the ones I loved would take about 18 pages. But here are a few of them…

“….All of us have secrets in our lives. We’re keepers or keptfrom, players or played. Secrets and cockroaches — that’s what will be left at the end of it all.”

“Dying’s a boring side effect.”

“You really didn’t see the sadness or the longing unless you already knew it was there. But that was the trick, wasn’t it? Everyone had their disappointment and their baggage; only, some people carried it in their inside pockets and not on their backs.”

“Reality’s what other people dream for you.”

“It was a sort of ferocious, quiet beauty, the sort that wouldn’t let you admire it. The sort of beauty that always hurt.”

“He danced on the knife’s edge between awareness and sleep. When he dreamt like this, he was a king. The world was his to bend. His to burn.”

Things I Didn’t Like
This one took me longer to get into it than The Raven Boys. I’d say I wasn’t fully “in” the story until the halfway point, but once I get there I was hooked yet again.

Yes he was entertaining and I liked what he added to the plot, but man was Joseph Kavinsky such an ass. And I’m sure the grating voice that the narrator did didn’t help. He had such a punchable voice.

I’m really happy that I’m giving this series another chance. The world is literally magic and the characters are captivatingly real. And there’s such genuine emotion it’s impossible to not become invested. I can’t wait to see what happens next.

2 thoughts on “Audiobook Review | THE DREAM THIEVES by Maggie Stiefvater”