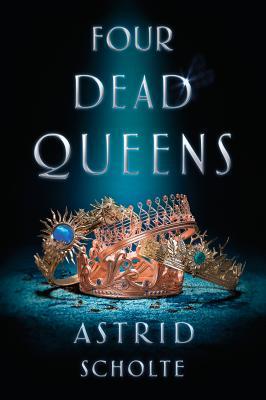 Rule thirteen: Only a queen may sit upon the throne. When she takes the throne, she accepts the responsibility to rule the quadrant until her dying day.

The good news, I started reading again. The bad news, I didn’t enjoy this as much as I wanted too. But I will forever be grateful to this book for pulling me out of such a horrible slump. Four Dead Queens follows renowned thief Keralie Corrington as she’s thrust into a dark conspiracy that leaves all four of Quadra’s queens dead. Keralie teams up with the stoic and logical Varin to try and clear their names before their lives are forfeit in this fast-paced and tangled story.

Things I Liked
So this book had some genuinely great surprises that kept me engaged and wanting more. One completely took my by surprise and I literally gasped out loud. It was such a clever idea and moved the story forward creatively. Another turned your expectations on their head. Overall the twists and surprises made sense, moved the story forward creatively, and kept me engaged.

So I loved Quadra’s politics and worldbuilding. I like that each region is responsible for different facets of life (technology/medicine, arts, crops) and seeing how these places shaped their ruling queen was really cool.

I think that the multiple POVs were used really effectively to not only introduce all the important characters but to move the story along at a quick pace. It was truly impossible to bored while reading this because the story did not let up at all.

Things I Didn’t Like
The romance was just so unnecessary. There really isn’t much else for me to say besides that I felt absolutely no chemistry between the romantic pairing and I didn’t get anything from them.

Even with all the great surprises and the engaging fast pace, I felt an overall lack of tension and suspense in the story. Resolutions happened quickly and consequences didn’t seem to have a lasting impact. This could be because this is a standalone story and a lot had to happen so there wasn’t time to draw things out and really create a build. But I do think this would have made a fantastic duology, and really given more depth to the world and characters.

I do think it was hard to tell how time was framed in the story. Because the story is so fast paced it seemed like everything was happening instantaneously. But sometimes days had went by within the story. It was just a bit jarring a few times.

Four Dead Queens was truly an excellent fantasy debut with wonderful worldbuilding and plot progression. Keralie is a spunky main character who is so easy to follow. I really liked getting to know the four Queens and seeing their distinct personalities. While the overall story let me down, there are some really great elements that makes this a great read.