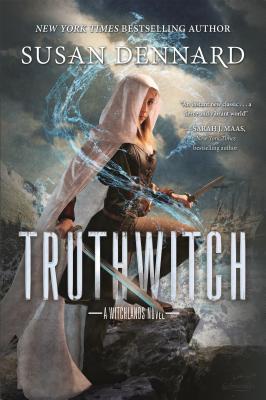 “It wasn’t freedom she wanted. It was belief in something—a prize big enough to run for and to fight for and to keep on reaching toward no matter what.”

Sometimes the second time really is the charm. I tried reading Truthwitch for the first time almost 2 years ago and I just could not get into it, but it was always one of those books that I would see and just know in my gut that I would enjoy it if I gave it another chance. I’m happy to say that I have read, and thoroughly enjoyed, Truthwitch. We follow the adventures of unlikely friends Safiya and Iseult – both of whom are gifted with unique forms of magic, or witchery as they strive for their own freedoms in this country on the brink of war.

Things I Liked
Even if I didn’t like anything else in the book, I would continue with this series for the worldbuilding alone. It was so detailed, rich, and complex without being overwhelming. I’m not kidding when I say I loved every piece of information we learned about the world – the Origin Wells, the 20 Year Truce, the different Witcheries, the different countries and their beliefs- GIVE ME ALL OF IT. It was so easy to get lost in the world because it was so well constructed. Easily one of my favorite settings I’ve ever read.

As a self proclaimed character driven reader, I always love stories more when I love the characters. But I have to say, I didn’t really connect with the characters individually until almost the end of the story. BUT all throughout the novel there was just some fantastic character and relationship moments that made me care. In all honesty, Truthwitch is very much a friendship story (my fave) about the dedication and unconditional love between Safi and Iseult. And while it took me a while to like them on their own, I was hooked on their relationship from page 1.

Things I Didn’t Like
So I love action scenes as much as the next person, and the immense action in the story definitely made for a quick read, I just found that I often got turned around in them. It wasn’t enough for me to have to reread long passages or anything, but it did keep me at more of a surface level investment wise. But I do thing the bigger action scenes at the end of the story were easier to follow.

While I did get a little bit muddled in the middle of the story, the ending was strong and left me hungry for more. Truthwitch is a story of friendships, political power, and escaping expectations. The world is vast and enchanting with charismatic and charming characters. It’s not a story you’ll soon forget.

One thought on “Review | Truthwitch by Susan Dennard”