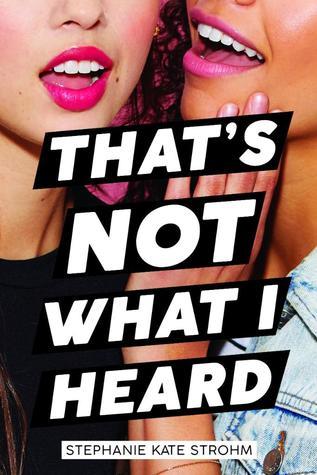 Title: That’s Not What I Heard

Stephanie Kate Strohm’s books are always such hilarious and compulsively readable books. Once you pick them up, you can’t put them down and That’s Not What I Heard is no different. We follow the lives of teens at William Henry Harrison High School after the golden couple breaks up and no one is quite sure why. Rumors are started and lines are drawn in this high school romcom romp.

The best words I can use to describe That’s Not What I Heard are dramatic and entertaining. Stephanie’s writing is just so easy to read and get lost in – I usually end up reading her books in one sitting and I find they’re the perfect thing to pick up when I don’t know what reading mood I’m in. I also love how she incorporated so many POVs into her stories as well – it’s never overwhelming, but it adds so much to the chaotic and frenzied nature of the story. And while I do enjoy all the POVs, because there’s so many, and it’s such a quick read, I’m never really invested in the story. But I don’t mind that so much, because it’s not what I’m looking for from this particular book.

That’s Not What I Heard is a big game of he-said she-said, with exaggerated high school politics that come together in creative and ridiculous ways. 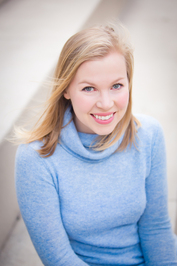 Stephanie Kate Strohm is the author of The Taming of the Drew, Pilgrims Don’t Wear Pink, Confederates Don’t Wear Couture, and the upcoming It’s Not Me, It’s You and Prince in Disguise. She grew up in Connecticut and attended Middlebury College in Vermont, where she was voted Winter Carnival Queen. Currently she lives in Chicago with her fiance and a little white dog named Lorelei Lee.

Thanks so much to the Fantastic Flying Book Club for hosting and organizing this tour! Make sure you check out these other amazing bloggers for their thoughts on this hilarious high school romcom too!

Make sure you check out the bloggers and this super fun read and grab your copy.