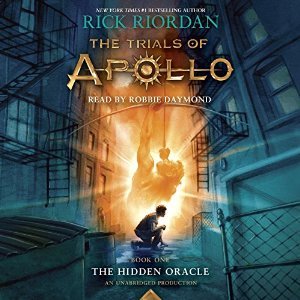 Title: The Hidden Oracle (The Trials of Apollo #1)

Rick Riordan’s books are always so much fun and have the highest entertainment level possible, where you’re guaranteed to be in a good mood and completely devour the book. The first book in the Trials of Apollo series, The Hidden Oracle, is no exception. After angering Zeus, Apollo is cast out of Olympus and  turned mortal. He travels to Camp half-blood to try and solve the mystery surround the missing Oracles and gain Zeus’ favor in the process.

Apollo has always been one of my favorite Greek gods to see in modern adaptations because he’s so dramatic and charismatic. You can’t help but laugh and roll your eyes at his narcissism, while also routing for his growth and development. Along the way we get to see many of our favorite characters, with some great new introductions as well. I really loved being back in the Percy Jackson world and while the plot felt like it had  a much smaller scope than previous books (maybe because the lack of Oracles/prophecies) it was still such a fun experience.

2 thoughts on “Audiobook Review | The Hidden Oracle by Rick Riordan”