I feel like there’s a lot of really great sounding books coming out this month that I can’t wait to get too! But a lot of my May disappointments were June ARCs so I’m tempering my expectations a bit and trying to focus on the books I’m most interested in. 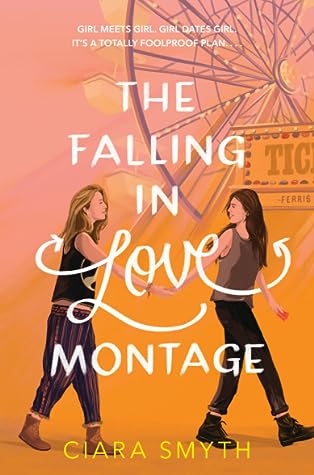 The Falling in Love Montage by Ciara Smyth | June 9
Saoirse doesn’t believe in love at first sight or happy endings. If they were real, her mother would still be able to remember her name and not in a care home with early onset dementia. A condition that Saoirse may one day turn out to have inherited. So she’s not looking for a relationship. She doesn’t see the point in igniting any romantic sparks if she’s bound to burn out.

But after a chance encounter at an end-of-term house party, Saoirse is about to break her own rules. For a girl with one blue freckle, an irresistible sense of mischief, and a passion for rom-coms.

Unbothered by Saoirse’s no-relationships rulebook, Ruby proposes a loophole: They don’t need true love to have one summer of fun, complete with every cliché, rom-com montage-worthy date they can dream up—and a binding agreement to end their romance come fall. It would be the perfect plan, if they weren’t forgetting one thing about the Falling in Love Montage: when it’s over, the characters actually fall in love… for real.

I’ll Be the One by Lyla Lee | June 16
Skye Shin has heard it all. Fat girls shouldn’t dance. Wear bright colors. Shouldn’t call attention to themselves. But Skye dreams of joining the glittering world of K-Pop, and to do that, she’s about to break all the rules that society, the media, and even her own mother, have set for girls like her.

She’ll challenge thousands of other performers in an internationally televised competition looking for the next K-pop star, and she’ll do it better than anyone else.

When Skye nails her audition, she’s immediately swept into a whirlwind of countless practices, shocking performances, and the drama that comes with reality TV. What she doesn’t count on are the highly fat-phobic beauty standards of the Korean pop entertainment industry, her sudden media fame and scrutiny, or the sparks that soon fly with her fellow competitor, Henry Cho.

But Skye has her sights on becoming the world’s first plus-sized K-pop star, and that means winning the competition—without losing herself.

Season of the Storm by Elle Cosimano | June 23
One cold, crisp night, Jack Sommers was faced with a choice—live forever according to the ancient, magical rules of Gaia, or die.

Jack chose to live, and in exchange, he became a Winter—an immortal physical embodiment of the season on Earth. Every year, he must hunt the Season who comes before him. Summer kills Spring. Autumn kills Summer. Winter kills Autumn. And Spring kills Winter.

Jack and Fleur, a Winter and a Spring, fall for each other against all odds. To be together, they’ll have to escape the cycle that’s been forcing them apart. But their creator won’t let them go without a fight.

When Anna Cicconi arrives to the small Hamptons village of Herron Mills for a summer nanny gig, she has high hopes for a fresh start. What she finds instead is a community on edge after the disappearance of Zoe Spanos, a local girl who has been missing since New Year’s Eve. Anna bears an eerie resemblance to Zoe, and her mere presence in town stirs up still-raw feelings about the unsolved case. As Anna delves deeper into the mystery, stepping further and further into Zoe’s life, she becomes increasingly convinced that she and Zoe are connected—and that she knows what happened to her.

Two months later, Zoe’s body is found in a nearby lake, and Anna is charged with manslaughter. But Anna’s confession is riddled with holes, and Martina Green, teen host of the Missing Zoe podcast, isn’t satisfied. Did Anna really kill Zoe? And if not, can Martina’s podcast uncover the truth?

What books are you looking froward to this month? Share below!

One thought on “June 2020 Anticipated Releases”