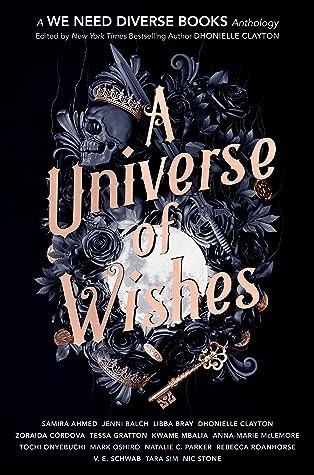 This was an pretty good anthology, not my favorite I’ve ever read – I think it had a bit too much sci-fi for my taste, but there was a lot of great stories with some excellent commentary.

A Universe of Wishes by Tara Smith | ★★★★☆
I was immediately here for the cool mythology surrounding wishes and the connection between potential and desire. I loved how magic is passed in the world as people’s magic potential is returned to the earth. Overall this was a hope-filled story with a hint of romance.

The Silk Blade by Natalie C. Parker | ★★☆☆☆
Three potential suitors are competing to be the consort to the Bloom of Everdale. And two of them have an immediate connection and choose each other instead. I thought this was an okay story – there was a lot of worldbuilding potential given, but this was just way to short to have any sort of impact on me.

The Scarlet Woman: A Gemma Doyle Story by Libba Bray | ★★★☆☆
Having not read the Gemma Doyle series, I wasn’t sure what kind of impact this story would have on me. But in the beginning, the historical setting tied with the secret societies and magical worlds made me want to read the series so that was fun. But after about the halfway mark, the story did seem to drag a bit and started to seem a bit long.

Cristal y Ceniza by Anna-Marie McLemore | ★★★★☆
This was the first fairytale retelling short story in this anthology, and I have to say, they were some of my favorites. This one was a Cinderella-inspired story about a girl trying to secure a place in a more tolerant kingdom to help protect her mothers relationship from being split up. This one had a lot of nice family moments – which is always a favorite thing of mine.

Liberia by Kwame Mbalia | ★☆☆☆☆
This has such a low rating not because there was anything wrong with it, but just because I didn’t like anything about it. It’s a sci-fi story about a ship on a mission to the colonies (which are somewhere). But Kweku, our main character who works with plants and research doesn’t want to leave the damaged ship without a master plant.

A Royal Affair by V.E. Schwab | ★★★★☆
I thought it was a little weird that a short story for Schwab’s adult fantasy story was included in this YA anthology, but I love Rhy and Luc, so I wasn’t too made. Here we get to see some of the background and origins of their relationship that was glossed over in The Shades of Magic series. I really liked seeing their beginnings and being back in this world.

The Takeback Tango by Rebecca Roanhorse | ★★★☆☆ (3.5 Stars)
This was another sci-fi story, but I instantly connected with these characters and world more. This was a very interesting commentary about colonization and museum culture. I do think it was a little too short to have feelings on the light flirting between the two thieves who want to rehome artifacts back to their actual cultures.

Dream and Dare by Nic Stone | ★★★☆☆ (3.75 Stars)
Another fairytale inspired story, but this one didn’t work for me quite as well. I liked Princess Dare taking some freedom and agency for herself, but parts of this short story were incredibly repetitive right before the story abruptly ends- which made it feel awkwardly long. But it like the idea of the story about defying expectations.

Wish by Jenni Balon | ★★★☆☆ (3.5 Stars)
This was another story about wishing – About Ariadne, who wishes to go to Earth from their Venus colony. But her auto-immune disease would make re-entry fatal to her, and wishes don’t work on people because their too complex. But there is a hopeful feeling despite Ariadne’s wishe not being able to be granted.

The Weight by Dhonielle Clayton | ★★★★★
The concept for this story was really weird – you can have your heart removed from your body and weighed to discover your truth – who you love, in what way, how intensely – and it’s almost used like a couple’s therapy band-aid. Super interesting concept and an ambiguous ending that really worked for me.

Unmoor by Mark Oshiro | ★★★★★
This was an urban fantasy story, which was a nice change of pace from a lot of the sci-fi that had been happening in the story so far. We follow Felix in the aftermath of a recent breakup with his boyfriend who wants help moving on. He wants his memories unmoored- or disassociated from physical locations so they aren’t triggered anymore. I think this story had the best emotional impact for me.

The Coldest Spot in the Universe by Samira Ahmed | ★★★★☆
This was a post-apocalyptic story that follows 2 timelines – one during the apocalypse and one thousands of years in the future where an alien race is exploring and chronicling life on earth. There was a lot of archeological vibes and I was totally here for it.

The Beginning of Monsters by Tessa Gratton | ★☆☆☆☆
Again, this wasn’t necessarily bad, it just confused the hell out of me and I was lost for a large part of the story. There is a lot of commentary about gender constructs and I liked that, but I just didn’t connect with the limited and somewhat rushed worldbuilding of this particular story.

Longer Than the Threads of Time by Zoraida Córdova | ★★★★☆
A Rapunzel-inspired story set in modern day New York . This was a fun take on the story and I liked the darker nature surrounding Danaë (our Rapunzel character) and Fabían and their instant connection.

Habibi by Tochi Onyebuchi | ★★★☆☆ (3.5 Stars)
This was a nice closer to the anthology. It was written like pen pal letters between Quincy and Omar, who quickly (but realistically) develop a deeper connection through these shared letters about their respective difficult times. It’s a cathartic story about longing and hope and was a positive way to wrap up this anthology.

A good anthology with some authors who I now definitely want to read more from in the future – which is my favorite thing about reading anthologies in the first place, so I’d say this was a success.