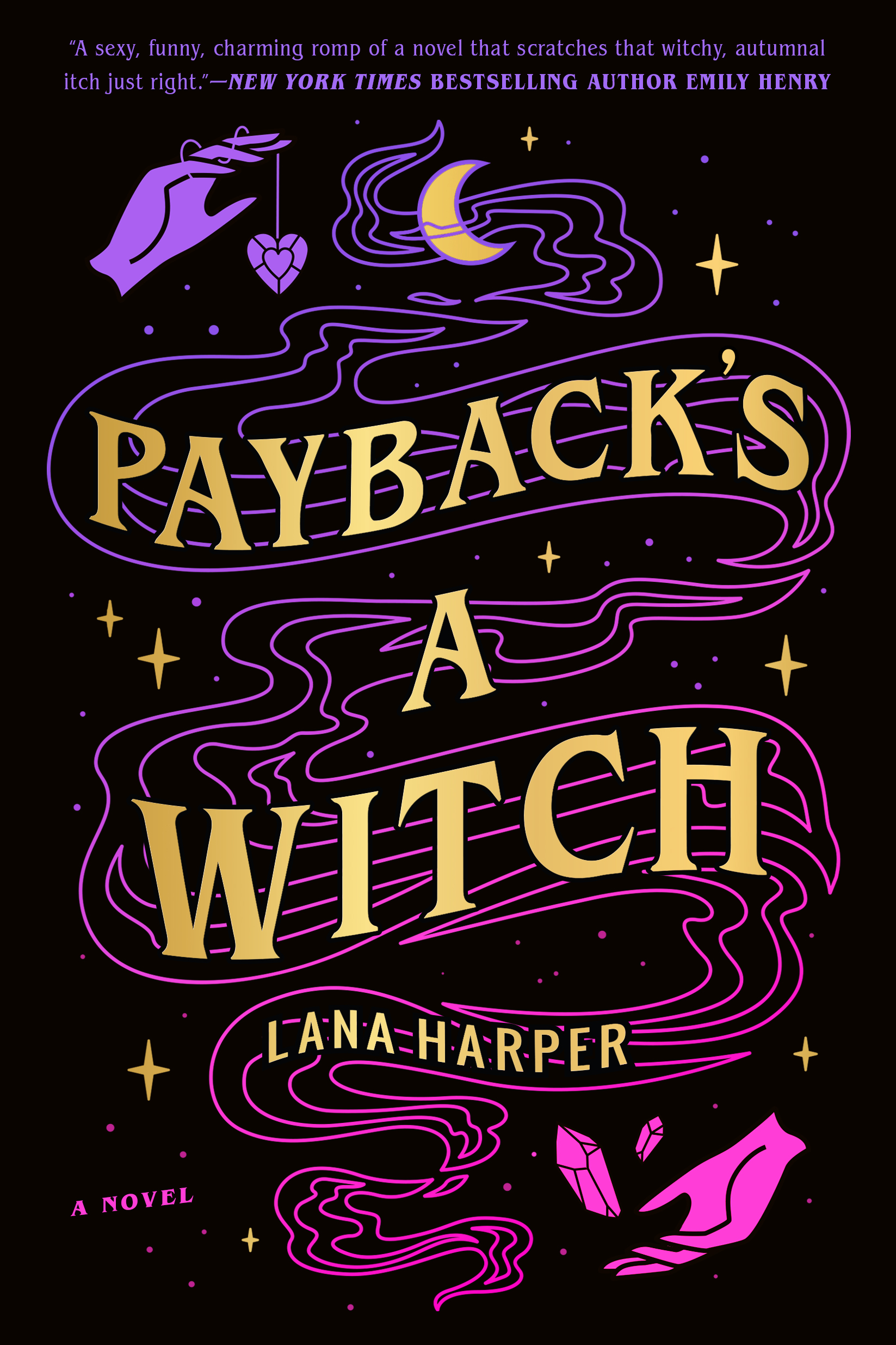 Emmy Harlow is a witch but not a very powerful one–in part because she hasn’t been home to the magical town of Thistle Grove in years. Her self-imposed exile has a lot to do with a complicated family history and a desire to forge her own way in the world, and only the very tiniest bit to do with Gareth Blackmoor, heir to the most powerful magical family in town and casual breaker of hearts and destroyer of dreams.

But when a spellcasting tournament that her family serves as arbiters for approaches, it turns out the pull of tradition (or the truly impressive parental guilt trip that comes with it) is strong enough to bring Emmy back. She’s determined to do her familial duty; spend some quality time with her best friend, Linden; and get back to her real life in Chicago.

On her first night home, Emmy runs into Talia Avramov–an all-around badass adept in the arts of divination–who is fresh off a bad breakup…with Gareth Blackmoor. Talia had let herself be charmed, only to discover that Gareth was also seeing Linden Thorn–unbeknownst to either of them. And now she and Violet want revenge. Only one question stands: Is Emmy in?

But most concerning of all: Why can’t she stop thinking about the terrifyingly competent, devastatingly gorgeous, wickedly charming Talia Avramov? 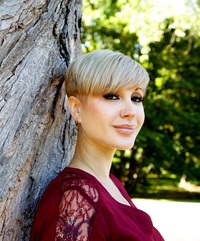 Lana Harper is the author of four YA novels about modern-day witches and historical murderesses. Born in Serbia, she grew up in Hungary, Romania, and Bulgaria before moving to the US, where she studied psychology and literature at Yale University, law at Boston University, and publishing at Emerson College. She recently moved to Chicago with her family.

As soon as I crossed the town line, I could feel Thistle Grove on my skin.

That I was in my shitty beater Toyota made no difference; maybe the town could sense one of its daughters coming home, even after almost five years away. A swell of raw magic coursed into the car, until the air around me nearly shimmered with potential, bright and buzzy and headier than a champagne cocktail. As if Thistle Grove’s own magical heart was pulsing eagerly toward me, welcoming me back. No hard feelings about my long absence, apparently.

Made one of us, I guess.

The onslaught of magic after my dry spell was so intoxicating that I hunched over the steering wheel, taking shallow breaths and wondering a little wildly whether you could overdose on magic after having gone cold turkey for so long. From the passenger seat, Jasper cast me a glinting, concerned glance from beneath his silvery fringe and shoved a clumsy paw onto my thigh.

That was the thing about growing up with magic. Until you left it behind for good, you had no idea how incredible it felt just to be around it.

And it wasn’t only the air that seemed different. Through my spattered windshield, the night sky had changed, snapping into Ÿber-focus like a calibrated telescope. Above Hallows Hill, the unlikely little mountain the town huddled up against, a crescent moon hung like a freshly whetted sickle. Waning crescent, my witch brain whispered, already churning up the spells best cast in this phase. Its silhouette looked like it could carve glass, impossibly perfect and precise, the kind of moon you’d see in a dream. The constellations that surrounded it like a milky spill of jewels were arranged the same as on the other side of the town line but better somehow, more intentional, clear-cut and brilliant as a mosaic set with precious gems. So enticing, they made me want to pull the car over and tumble out, head hinged back and jaw agape, just to watch them glitter.

With an effort, I resisted the temptation. But when the orchards that belonged to the Thorns appeared on my left, I gave in just enough to roll down my window.

The night air gusted against my face, smelling like an absolute of fall; woodsmoke and dying leaves and the faintest bracing hint of future snow. And right below that was the scent of Thistle Grove magic, which I’ve never come across anywhere else. Spicy and earthy, as if the lingering ghost of all the incense burned by three hundred years of witches had never quite blown away. A perpetual Halloween smell, the kind that gave you the good-creepy sort of tingles.

And fallen apples, of course. The Thorns’ rows and rows of Galas, Honeycrisps, and Pink Ladies, sweet and cidery and indescribably like home.

It all made the part of me that used to adore this place-oh, cut the shit, Emmy, the part of you that still does, the part that will never, ever stop-throb like first-love heartache. My eyes welled hot with sudden tears, and I knuckled them clear more violently than necessary, angry with myself for sinking into nostalgia so readily.

Sensing my mood plummeting, Jasper gave an aggrieved snort, tossing his regally mustachioed snout at me.

“I know, I know,” I groaned, dragging a hand over my face. “I promised not to get too in my feelings. I’m just tired, bud. From now on, it’ll be all business till we can get out of here.”

He huffed again, as if he knew me much too well to buy into my stoic crap. I might be back here only because Tradition Demands the Presence of the Harlow Scion, but nothing in Thistle Grove was ever that simple. Especially when it came to the heir of one of the founding families.

A stately three-story colonial almost as old as the town itself-though you wouldn’t know it, to look at its magically weatherproofed exterior-Harlow House has never had a fancy name, thereby upholding the timeless Harlow legacy of being both the least pretentious and least relevant of the founding families. As always, a candle burned in every window; thirteen flames, for prosperity and protection. The flying owl weather vane spun idly in the night breeze, and the dreamcatcher windchimes hung by the front door clinked delicately against one another. A plume of smoke coiled from the brick chimney in a curlicued wisp before vanishing into the velvety dark above.

It looked like a storybook house belonging to your favorite no-nonsense witch-which, come to think of it, sounded like both my parents.

And it was all like I remembered, except that the thought of going inside made me feel painfully stripped of breath. There was an invisible moat of hurt surrounding my former home, years of unanswered questions. Restless water, teeming with the emotional equivalents of piranha and stinging jellyfish.

I couldn’t do much about the hurt, and “because Gareth Blackmoore ruined this town for me” still seemed like a shitty answer to the question all the others boiled down to, which was: Emmy, why haven’t you come home all this time?

So I turned the car off and just sat with my head bowed, listening to the ticks of the engine settling and Jasper’s low-grade whine, focusing on my breath. When I’d collected myself about as much as I was going to, I lurched out of the car on travel-stiff legs and let Jas out to baptize the quiet street, then hauled my battle-scarred suitcase and gigantic duffel bag out of the trunk. By the time he came loping back, I’d managed to wrestle everything up onto the columned porch with an admirable minimum of cursing.

I still had my key, but it seemed horribly rude and presumptuous to use it after a five-year absence, so I knocked instead. When the door swung open, I managed to flinch only a little, blinking at the warm light spilling from within.

Excerpted from Payback’s a Witch by Lana Harper