“Dead-eyed. That’s what they said, wasn’t it? Lifeless, glassy, empty. Dead eyes were a constant companion now, following her around, never more than a blink away.”

As Good as Dead by Holly Jackson 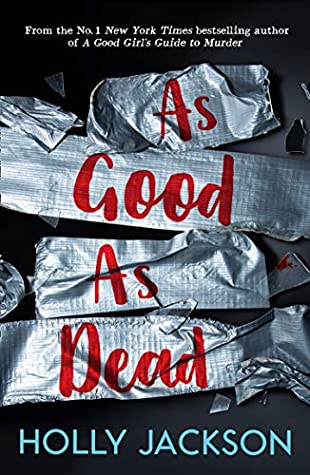 This was been a fun, quick-paced YA mystery series that I’ve enjoyed flying through earlier this year. So I was obviously excited for this conclusion to the series. I do think this one verges into the ridiculous and needs some more suspension of disbelief than the previous too, but it’s still an engaging read.

Goodreads Synopsis: Pip Fitz-Amobi is haunted by the way her last investigation ended. Soon she’ll be leaving for Cambridge University but then another case finds her . . . and this time it’s all about Pip.

Pip is used to online death threats, but there’s one that catches her eye, someone who keeps asking: who will look for you when you’re the one who disappears? And it’s not just online. Pip has a stalker who knows where she lives. The police refuse to act and then Pip finds connections between her stalker and a local serial killer. The killer has been in prison for six years, but Pip suspects that the wrong man is behind bars. As the deadly game plays out, Pip realises that everything in Little Kilton is finally coming full circle. If Pip doesn’t find the answers, this time she will be the one who disappears . . .

One thought on “First Lines Fridays #124”