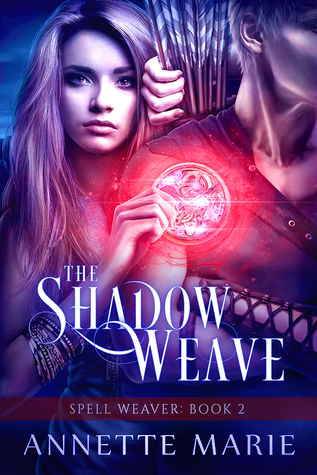 Clio might be a nymph living in exile among humans. And she might possess the rare ability to mimic any magic she sees. And she might have just seriously ticked off the most powerful family of spell weavers in the Underworld.

But she is not in love with an incubus.

Lyre is the rebellious black sheep of said weaver family, and he’s the only reason she survived her recent Underworld “vacation.” He’s also the sexiest thing she’s ever seen. Together, they have to track down a catastrophically dangerous magic—a magic he created, she sort of stole, and they both lost—before his family gets their hands on it. And that means fighting alongside him in a desperate attempt to avert complete disaster.

But she is definitely not in love with him. At least, she’s pretty sure she’s not.

Mostly sure.
Maybe sure?
…Crap.

The Shadow Weave picks up right where The Night Realm left off. We follows Clio and Lyre after they’ve escaped from Asphodel and are determined to get back Lyre’s KLOC spell before it can be used to destroy all of their worlds. I just have such a love for urban fantasy and this world that Annette Marie has crafted.

I really liked that we got more of Clio’s background, learning more about her pre-Earth life. It really added some depth to her character. Like her other books, The Shadow Weave is not short on action. The fight scenes are engaging and intense and feel like there are stakes. Each fight is hard fought and has consequences. I also really enjoyed the Easter Eggs we get to the Steel & Stone series – I LOVED seeing a young Piper and seeing the River Sytx again. I did think that some of the scene transitions were a little jarring. They weren’t as fluid as I would have liked – there was a bunch of location changes or micro time jumps that felt distinct.

Overall I had a really fun time with this book and I can’t wait to see how everything wraps up in The Blood Curse!

Annette Marie is the author of the Amazon best-selling YA urban fantasy series Steel & Stone, which includes the 2015 Goodreads Choice Award nominee Yield the Night. Her first love is fantasy, a limitless realm of creativity where she can break all the boring rules of real life, but fast-paced urban fantasy, bold heroines, and tantalizing forbidden romances are her guilty pleasures. She proudly admits she has a thing for dragons, and her editor has politely inquired as to whether she intends to include them in every book.

Annette lives in the frozen winter wasteland of northern Alberta, Canada (okay, it’s not quite that bad). She shares her life with her remarkably patient, comparatively sensible husband and their furry minion of darkness—sorry, cat—Caesar. When not writing, she can be found elbow-deep in one art project or another while blissfully ignoring all adult responsibilities.

Thanks to Xpresso Tours for organizing and hosting the tour for this wonderful urban fantasy! Make sure you follow along with the rest of the tour!

And Make sure you don’t forget to enter the GIVEAWAY before you go! Enter to win 1 of 2 $10 Amazon gift cards!

I received a copy of the book from the author in exchange for an honest review.